It's been a while since I've written properly. I suppose it's over three years now. I have enjoyed reading your Christmas newsletters, though. I'm looking over them again now. I can't believe Sam's going to be at secondary next year! Daisy looks both scarily small and all-grown-up in her school uniform. Wow! You've had an entire year of them both out of the house.

I honestly hope you've achieved nothing at all and spent the whole time doing something completely frivolous like watching re-runs of Star Trek, walking barefoot through flowers or creating an internet meme involving an evil toddler: 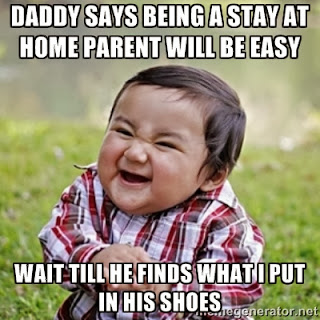 Unfortunately, I suspect you've been trying to achieve things. You'll have put up shelves, sorted junk, tidied the garden, filed paperwork, helped out on class trips, tried to get some exercise and even had the occasional peek at job ads.

Seriously, stop it. Have a lie down and eat crisps (but maybe not at the same time or you'll create hoovering for yourself). You've been run off your feet chasing after small children for nearly a decade. Have a rest while you can. It's not like you can really start back on your career for several more years yet unless you're up for Sam and Daisy spending half their lives at after-school and holiday clubs. And I'm guessing that if you were up for that, you'd have traded in the housedad lifestyle for something with better hours and higher pay ages ago. (You know, back when you still had hair.)

Ach, and there I go again, offering advice before I've even really started. You're probably curious as to why I'm writing after all this time just to tell you what you already know. You've been a housedad for so long, I don't need to tell you anything anymore. You can keep the kids entertained with three bits of fluff and a hairclip. A daytrip to the zoo holds no fear for you and is only getting easier as the children get older. Heck, you can send Sam to go buy milk on a Saturday morning while you stay in bed. Life is easy...

I remember those golden days. Sort of. They're a little lost in a haze of putting up shelves, sorting junk, helping on class trips, etc, etc, etc. I wish I'd stopped and watched the flowers or dreamt of walking barefoot through re-runs of Star Trek or just had a lie down in some crisps. Sadly, it's too late now. I've got things to do, places to be and children who, well... who are great and lovely... but... erm... but who I can't simply placate with Extra Strong Mints or effectively punish by sending to their rooms. They have moods and emotions and opinions. They have knowledge which I didn't give them. One of them is bigger than me. One of them is already turning into a teenage girl!

The only occasion I can remember feeling out of my depth as a parent was sitting in the delivery room holding Fraser for the first time. I stared at him, he stared at me and we both thought, 'Shouldn't Mummy be doing this?' We were over it by end of the week, however. Ever since, life has been a tiring but satisfying rollercoaster of hugs, smiles, tears, screeching and slime.

Until recently, anyway. Lately, I've been getting tense. Fraser is at secondary, Lewis will be there next year and Marie is only another three years after that. Relatively soon, I'll need a plan as to what I'm going to do next. What comes after being a housedad? I'm going to have to decide what I want to be when I grow up. This is a little dis-heartening considering I'm 40 in a couple of weeks. Worse, I'm beginning to worry I'm out of my depth again. The children outnumber me, they're smarter than me, they can run faster than me and they have much more free time than me to plan their strategy. If this were a war, I'd be working on my surrender speech.

I'm wondering if you can give me any advice?

Yours in a changing world,

PS Maybe I should make up for lost time and start my own internet meme: 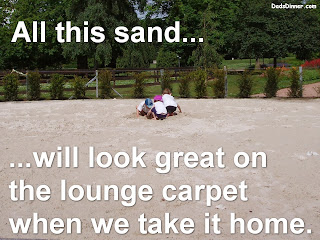 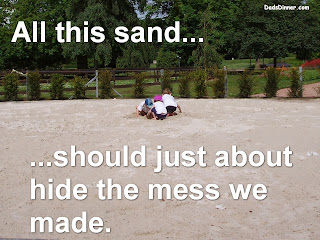 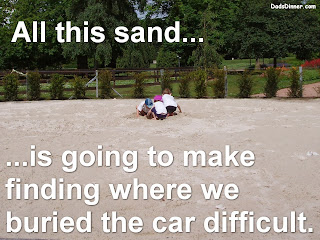 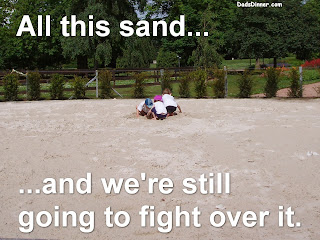 Enjoying this site? Then consider making a donation to Tearfund so they can help communities to overcome poverty.