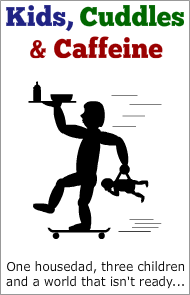 It's not difficult being a stay at home parent. In fact, even a man could do it.

Ed is that man. He just wishes he wasn't the only one. Surrounded by mums and two-year-olds, he hankers after someone to talk to about PlayStations as well as poo.

That's where Dave comes in. He's a new housedad still learning the ropes. When they make contact, Ed seizes the chance to pass on all he's learnt. Offering advice about everything from potty training to surviving a zombie invasion, Ed shares the epic tale of his daily battle to stay sane in a world full of crazy people who keep getting between him and quality time with his Xbox.

Besides educating Useless Dad, Steve, who barely knows which way up to hold his children, Ed finds himself match-making Scary Karen, the forthright organiser of the local playgroup. Meanwhile, his best friend, Rob, is afraid of commitment but unexpectedly about to become a father. Ed has to reassure him, compete with Supermum who lives next door and, somewhat reluctantly, cross swords with the neighbourhood's most terrifying granny.

Oh, and then there's the almost trivial matter of raising three children to be happy, polite, confident individuals. (Preferably without making too much mess.) How hard can it be?

WANTED: HOUSEDAD
Job Description: The hours are long, the holidays are rubbish, the pay's a joke and there's heavy exposure to toxic biological waste. On the plus side, there's plenty of fresh air and exercise, a steady supply of hugs, relatively little stress, strong job satisfaction and an army of amusing minions. You also get to play Hungry Hippos and call it work.

Email ThisBlogThis!Share to TwitterShare to FacebookShare to Pinterest
Home